A chance to briefly return to my ecological roots occurred recently with the publication of my Masters paper in Conservation Science and Practice.

My master’s paper (and first first-author paper 🎉 👩‍🏫) on invasive cane toads in Aus is finally published! 😄 Thanks to @benflips and @r_tingley for making this impossible project happen! Check it out ⬇️ #phdlife #WildOz #invasivespecies https://t.co/s59qFlnWsF pic.twitter.com/X4izAWzHBc

This paper tests the on-ground feasibility of a waterless barrier to halt cane toad spread in Western Australia.

The waterless barrier strategy capitalises on the cane toad’s reliance on artificial water points, specifically within a thin corridor of toad-friendly habitat between Broome and Port Hedland, squeezed between the ocean and the Great Sandy Desert. 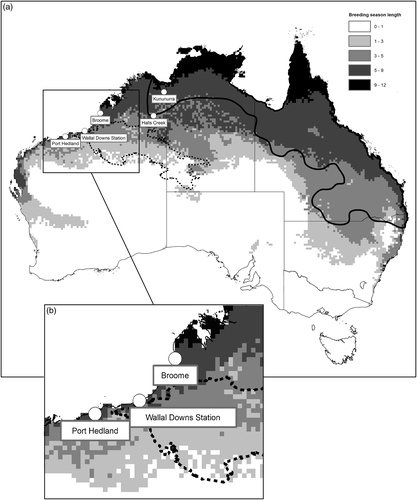 Figure 1. Map of the study area. Toads were collected around Kununurra, and transported to Wallal Downs Station in the Kimberley–Pilbara corridor. The invasion front was just southwest of Halls Creek during the time of the study (invasion front, as of 2017, shown as solid black line). Predicted cane toad distribution (based on breeding season length) is shown in grey shades.

During the wet season, toads are expected to move through the corridor landscape without issue. However, during the dry season we expect toads will be reliant on artificial water bodies, such as pastoral dams.

Making these water bodies inaccessible to toads (e.g. by raising troughs and sealing leaks) will make this area inhospitable for toads and therefore prevent their movement across the corridor and into the ecologically and culturally rich Pilbara region. The corridor need only be wide enough (~70km) to account for toad movement during the wet season.

My project was specifically based around testing concerns from stakeholders around assumptions previous simulation modelling had made about the corridor landscape. For example, how could we be sure that cane toads wouldn’t survive the dry season through other means? What about deep goanna burrows, protective coastal vegetation or coastal fogs?

I aimed to directly test these concerns on the ground by translocating and radio-tracking cane toads within the barrier corridor. I did this using male cane toads only to eliminate the possibility of establishing a population ahead of the toad invasion front. 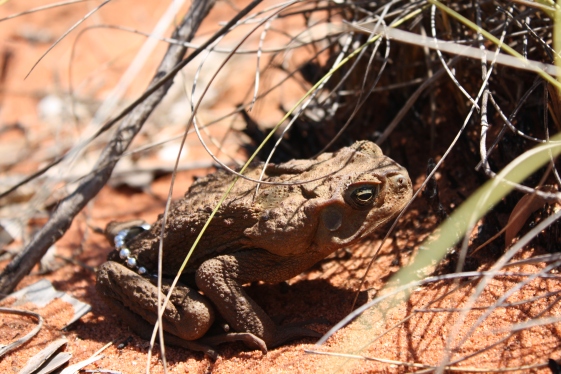 A cane toad with the radio transmitter on. Image: R. Hayes

I then tested the survival, movement rates, and use of shelter sites of toads across two kinds of habitat within the corridor (coastal and desert).

The toads were incredibly adept at finding shelter sites and moved some impressive distances. One particularly speedy toad moved 2.54km in one night! One of the largest single-night movements ever recorded in an anuran!

However, the toads only survived 2-3 days in this landscape, and the maximum predicted survival time was 5 days. In addition, contrary to what we expected, survival was higher in the desert habitat as compared to the coastal habitat. 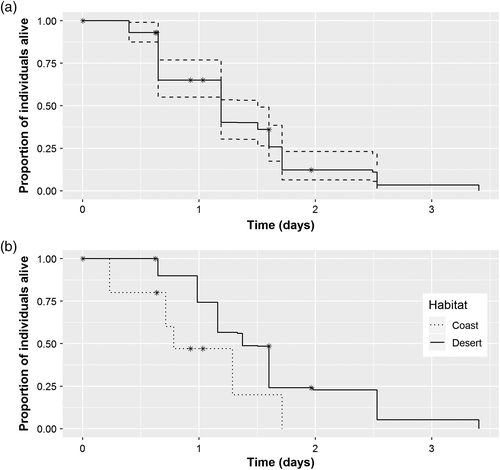 We largely attribute this survival difference to the availability of shelter sites. The desert habitat was filled with goanna burrows, while the coastal habitat had far fewer and lower quality burrows to shelter in. 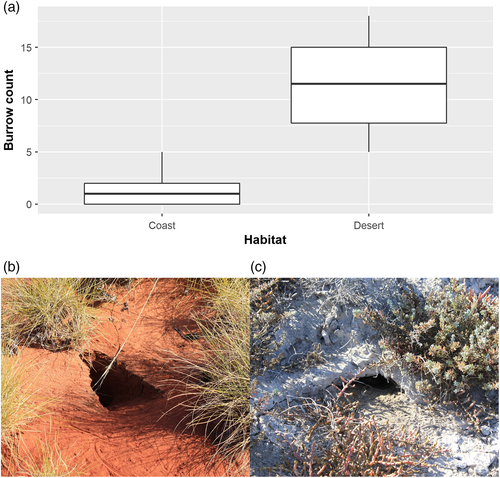 Figure 3. Burrows in coastal and desert habitats. (a) Numbers of burrows along six 6 × 100 m transects in each of coastal and desert habitats. Lower and upper hinges correspond to the first and third quartiles, and lower and upper whiskers extend to the smallest and largest values at most 1.5 * inter‐quartile range from the hinge. (b) Typical burrow in desert site. (c) Typical burrow in coastal site. Desert burrows tended to be deeper and appeared to provide higher quality toad shelter compared to coastal burrows. Images: R. Hayes

Ultimately this work provides further evidence to support the waterless barrier strategy, suggesting it may indeed be an effective and inexpensive method by which to prevent the cane toad’s impact on species in the ecologically and culturally valuable Pilbara region.

You can read more about my personal experience of this fieldwork on the ground on my science writing blog here.

Please keep to the path

life on the verge

Conservation for the 21st century